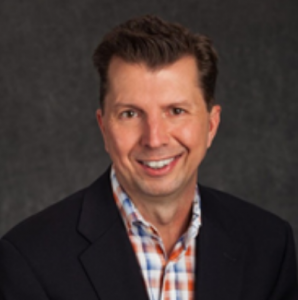 David Chayer (he/him/his) has over 22 years of nonprofit leadership and management experience. Before joining the SACIS and CAISA team, he served the American Red Cross for over 14 years in multiple senior leadership positions across the country, including El Paso, Texas, Dallas, Texas, Tallahassee, FL, Washington, D.C, and Corpus Christi, TX.  David began his Red Cross career as the State Director of Government and External Relations in Illinois, representing the Red Cross to state and federal government leaders and coordinating statewide disaster response and planning with emergency management.
In addition to his experience with the Red Cross, he also served as the Executive Director for The ALS Association Texas Chapter, a senior level position with the Council for a Strong America in Washington, D.C. and has more recently served as the Executive Director for the Center Against Sexual and Family Violence in El Paso, Texas and for Missouri KidsFirst in Jefferson City, Missouri.
Before joining the nonprofit world, David worked for six years in state and local government in Illinois, including positions with the City of Carbondale, Office of the Lt. Governor, and the Illinois General Assembly. In 2000, David was elected to the Divernon Village Board in his first-ever campaign for public office. He has also served as an Adjunct Instructor at Blackburn College where he taught State and Local Government. Chayer also served as a volunteer firefighter, and, for five years, served as the Head Cross Country Coach at Auburn Junior and Senior High School in Illinois.
Originally from St. Anne, Illinois, David holds a Bachelor of Arts degree from Blackburn College in Carlinville, Illinois and a Master’s of Public Administration degree from Southern Illinois University at Carbondale.

Maria Amill (she/her/hers) has served as the Medical Advocate at SACIS since February of 2020. She has a Bachelor of Arts in Communication Studies from Eastern Illinois University with a minor in Spanish. Maria loves working at SACIS because she believes in the mission of ending sexual violence and enjoys serving her community through advocacy. In her free time, she enjoys spending time with friends and family, cooking, and watching suspensful movies. 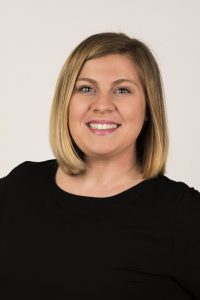 Stephanie Anderson (she/her/hers) has a full and diverse history here at SACIS. She served as an intern in 2013 before serving as a medical advocate, beginning in 2014. She joined the SACIS team full time in 2018 as our Volunteer Coordinator. Within her position she supervises, recruits, and trains all of our direct service volunteers, non-direct service volunteers, and interns. She graduated from Lake Land College in 2015 and from Eastern Illinois University in the Fall of 2019 with her Bachelors in Human Services and Community Leadership. 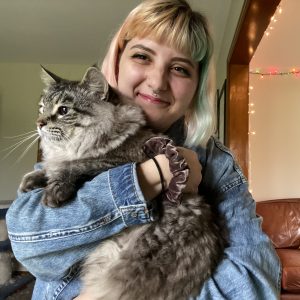 Ashlee Bell (she/her/hers) is the Administrative Assistant for SACIS. Ashlee greets clients as they come for counseling, offering a smile as they enter and leave the office. She graduated from Eastern Illinois University with her BA, majoring in Sociology and minoring in Anthropology. She joined SACIS in 2019 after working at the local record store where she gained confidence and a love for talking with customers and learning about them, their life experiences or the conversations that ensued. In her free time, she loves hanging in her hammock, listening to true crime podcasts and practicing tarot for self-care. 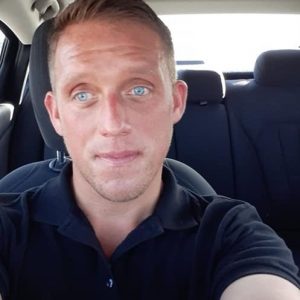 Trenton Butler (He, Him, His) has always had a passion for empowering,  and helping others heal from trauma. Trenton wants to support others through any crisis across their lifespan. Trenton completed the SACIS 40 Hour Crisis Volunteer training and worked as an intern during the spring 2021 semester. Trenton graduated from Lake Land College in Fall of 2020 and in May of 2021, earned an Associate in Applied Science- Human Services and an Associate in Arts- Psychology. He is currently a senior at EIU majoring in Human Services Programs Administration and will be starting a graduate program at EIU in the Fall of 2020. He also works as a Direct Support Professional for CTF Illinois at one of their day programs in Charleston. He worked at LSC Communications for six years until they closed in 2020. He is committed to supporting everyone impacted by sexual violence and always looks for the missing voices. 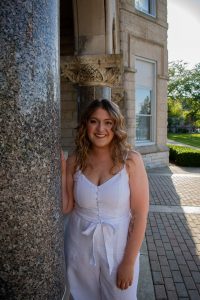 Alyssa Cravens (she/her/hers) is the Victim Awareness Campaign Specialist at SACIS. Within her position, she works to update training and prevention curriculum, create visual branding materials, produce educational resources, generate community awareness and promote the issues and effects of sexual violence through social media and our monthly newsletter, The SACIS Signal. Alyssa began working at SACIS in August of 2018 as an Office Assistant at our counseling office and transitioned into her current position at our main office in the Fall of 2019. She graduated in Spring of 2021 with a Bachelor of Arts in Mass Communication from Eastern Illinois University and now works at SACIS full-time! 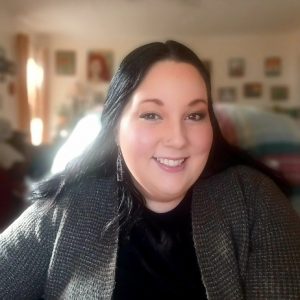 Corey Cunningham (she/her/hers) has been a Counselor at SACIS since 2020 and provides services to children, adolescents, and adults. Corey received both her Bachelor of Arts in Psychology and Master of Science in Clinical Mental Health Counseling from Eastern Illinois University. Prior to attending graduate school, Corey completed SACIS’ 40 Hour Crisis Volunteer training, which ignited her passion of helping those impacted by sexual violence. Corey is trained in Eye Movement Desensitization and Reprocessing (EMDR) and Trauma Focused Cognitive Behavioral Therapy (TF-CBT). She also utilizes Acceptance and Commitment Therapy (ACT), Dialectical Behavior Therapy (DBT), and play therapy expressive techniques. Corey is dedicated to providing support, empathy, and empowerment to survivors and their loved ones. 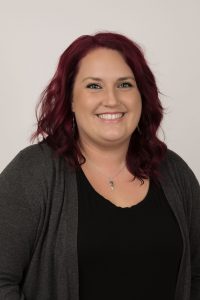 Amanda Feder (she/her/they) is the Director of Prevention Education. In 2012, she began volunteering with SACIS to assist her in writing curriculum on sex trafficking at a local level for her graduate thesis project at Eastern Illinois University. She provides education for school-aged students covering body safety and encouraging them to recognize and report abuse to trusted adults and/or professionals while also offering individual body safety programs for children. Amanda also provides free educational programs for local businesses, which range from single to multiple day training.

Brandee Hahn (she/her/hers) has been a Counselor at SACIS since 2019 and provides services to children, adolescents, adults and couples.  Brandee received her Master of Science in Clinical Mental Health Counseling from Eastern Illinois University and is an Illinois Licensed Professional Counselor (LPC).  Brandee uses a variety of therapy approaches and techniques based on the client’s needs and what works best for them.  Brandee is dedicated to providing a safe, supportive, empathetic and empowering environment to survivors and their loved ones. 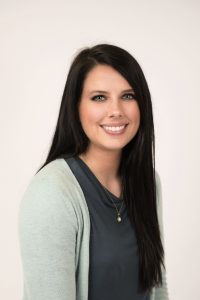 Ellie Haskett (she/her/hers) provides treatment to children, adolescents, and adult survivors of assault and abuse, as well as their significant others. She works to maintain a safe and nonjudgmental environment in which her clients feel supported, comfortable and heard during their time of healing and change. Ellie attended Eastern Illinois University, where she earned her Bachelor’s Degree in Family and Consumer Sciences, as well as her Master’s Degree in Clinical Mental Health Counseling. She has been a part of the SACIS team since August of 2018 and transitioned into her new role as Director of Counseling Services at the beginning of 2021. 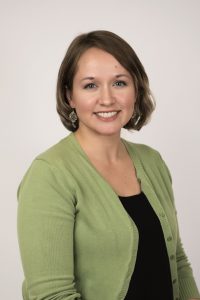 Samantha McCullough (they/them), our Program Director, maintains the organization of SACIS service and financial records, processes reimbursements and supply orders while helping coordinate office needs and flow. Samantha is a native to the area; returning from their studies at Millikin University in Decatur where they received two bachelor’s degrees.  In addition to their work at SACIS, Samantha is currently serving as the Secretary of PFLAG Charleston. 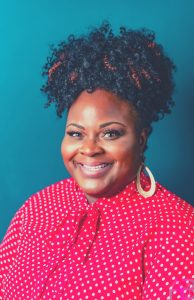 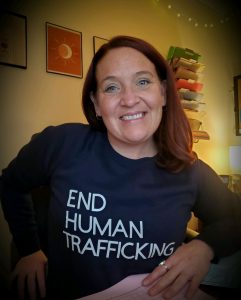 Kim White (she/her/hers) began her career with SACIS in 2019 as a volunteer on Team SACIS, moved forward a year later to become a part time medical advocate, and transitioned further to a full time Advocate/Case Manager/Legal Advocate position.  You will find Kim advocating throughout our community from the legal system, hospitals, and correctional system, to supporting our clients through community resources.

Before joining SACIS, she was a decorated Correctional LPN for many county jails in Indianapolis and surrounding counties as well as Plainfield Correctional Facility.  Kim is also a Veteran of the US Army where she served as a Combat Medic.

Kim is passionate about the work she does with SACIS and works daily to support survivors and show they can stand in their own power.  Providing unconditional support to help ensure no one feels alone along this journey. 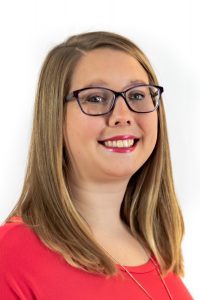 Elizabeth Amerman (she/her/hers) has been a Counselor at CAISA since October 2017. She has her Bachelor’s degree in Family Consumer Science, Family Services from Eastern Illinois University and earned her Master’s degree in Social Work from Southern Illinois University Carbondale. Elizabeth is a Licensed Social Worker. She is trained in Eye Movement Desensitization and Reprocessing (EMDR) therapy, Trauma Focused Cognitive Behavioral Therapy (TF-CBT), and Dialectical Behavior Therapy (DBT). 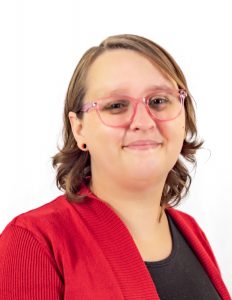 Rachel Carter (she/her/hers) is the Administrative Assistant and Volunteer Coordinator for CAISA. She has been with the organization since January 2018. She attended Lincoln Trail College and obtained her Associate’s in General Studies. Rachel has an extensive background in support services and program planning, coming from the library field before joining CAISA. Outside of work, she is an active member of Community Theater, and enjoys crocheting, reading, Dungeons and Dragons, and the occasional Netflix binge.

Sean Harris (he/him/his) is the Administrative Assistant and Case Manager for CAISA and has been with the organization since April 2020. He attended Olney Central College and Belmont University in Nashville Tennessee. Sean obtained an extensive background in Law Enforcement, Crisis Intervention, and Higher Education Policy while living in Nashville. 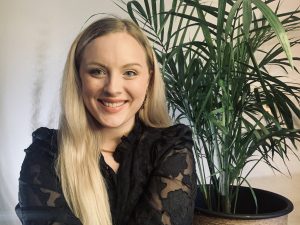 Darien Lee (she/her/hers) is a student at Southern Illinois University and is currently finishing her bachelor’s degree. She began working at CAISA as the Community Prevention Educator in Spring of 2021. In her free time, she enjoys listening to NPR podcasts, reading, and exploring creativity through interior design. 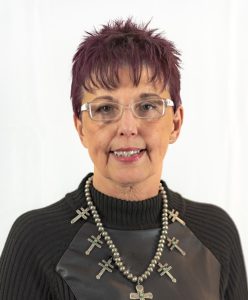 Mickie Owens (she/her/hers) is the supervisor of Medical Advocacy and the Legal Advocate with CAISA.  Mickie started as a volunteer with CAISA in 1998 and then joined our staff April 1, 1999.  She has provided advocacy services to over 1,100 survivors and their friends and family during this time.  She takes pride in the work she has done advocating for clients.  Mickie Co-Chairs the Illinois Coalition Against Sexual Assault Public Affairs Committee and is a member of the Illinois Sex Offender Management Board.  She has completed both the 40 hour Sexual Assault Nurse Examiner trainings for Adult/ Adolescents and Pediatrics.  She has received advance training on sexual assault, investigation, victim advocacy, stalking and domestic violence. Mickie went to college in her 30’s in the first wave of non-traditional students in the 1980’s.  She spoke to Indiana Higher Education Commission on the challenges faced by older students.  She went on to graduate from Vincennes University with an AS in Paralegal Studies.  She then attended Indiana State University and earned her BS in Criminology.  She additionally completed 2 years of graduate work.  Shortly after completing her degree Mickie was elected to the City Council in Vincennes, Indiana.  She is also a graduate of the Richard Lugar Excellence in Public Service for Women during the 1995-1996 year. Currently she is on the Board of Lawrence/Crawford Association for Exceptional Citizens. Mickie loves being an advocate and feels it is her life’s calling and passion. 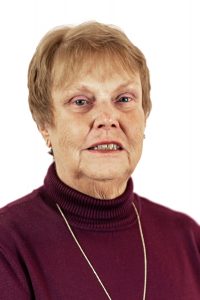 Brenda Wampler (she/her/hers) has been a counselor for over 25 years, and has been with CAISA since August 2014. She has an Associate’s in Science from Lincoln Trail College, a Bachelor of Fine Arts from St. Mary-of-the-Woods College, and a Master’s in Counseling from Eastern Illinois University. She has extensive training and experience in Dialectical Behavioral Therapy and Sexual Abuse Counseling. Outside of work, she enjoys painting, crafts, flower gardening, being outdoors, reading, eating out, playing with her dogs, and spending time with her family.